I have had an inexplicable interest in wood finishing for as long as I can remember. I’m not sure exactly where it began, but I do remember a time in my childhood when I was watching Dad finish a piece of wood with polyurethane, and being amazed at all of the character that this ubiquitous product brought out of seemingly plain and unremarkable stock. As a teenager, Dad and I put together a replica 1861 Colt Navy pistol. The grips were finished in gun stock oil. Again, this process and what it brought out of the wood absolutely fascinated me. Also, the idea of a finishing product that soaked into the wood to form a protective barrier inside the surface of the wood set my imagination off. (What can I say? Weird things stir my imagination!)
As a young adult, my interest in wood working really came into its own. I built 2 boats and a couple of pieces of furniture. I often studied books and websites on the subject to improve my abilities and get inspiration for new projects. During this time, I got the book “The Practical Woodworker” by Stephen Corbett. In the chapter on finishing in this book, the author made a reference to finishing with bee’s wax. For whatever reason, this idea stuck in my mind, along with the oil and polyurethane ideas from earlier.
Now, my wood working centers around making components for fishing rods and game calls. Since I envision these items receiving a lot of wear and tear, it is very important that my finish is water resistant and seeps into the surface of the wood, rather than lay on top of it. Of course, I’d like the finish to be attractive, bringing out the color and character of the wood. I have 2 go-to finishes I use on my calls. One is a home-made Danish oil that I call my “secret sauce”. I got this idea from Ed Glen and Greg Keats awesome book “Turning Custom Duck and Game Calls”. I soak my calls in the secret sauce for at least 4 hours, but preferably 24 hours. The time allows the thinned oil to penetrate into the surface of the wood, displacing any surface air pockets that might later allow for the intrusion of the elements. After the calls’ soak, I remove them, wipe off as much excess sauce as I can, and allow them to dry for at least 2 hours, but again, longer is better. Once dry, each call gets buffed with tripoli and white diamond polishing media and a coat of carnuba wax. The resulting finished product has highly visible grain and figure underneath a nice, moderately shiny surface. 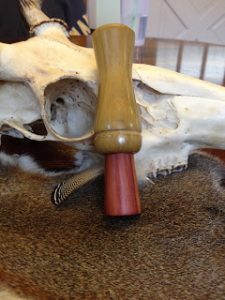 This past weekend, we attended the GON Outdoor Blast at the Gwinnett Center as vendors. For this event, I had to make a lot of calls. I’m not sure of the final number, but I think we had a total of around 70 calls! As I was preparing for this event, I realized there would be no way I could get a large number of calls finished in time using my secret sauce method. Fortunately, I remembered my curiosity about bees wax finishes, and a YouTube video I had seen on the subject by turner and call maker, Carl Jacobson. I refreshed my memory by watching the video and others like it, and decided that this was the quicker method I needed for the job. I found one of Mom and Dad’s old crock pots here at the house, and bought 2 pounds of all natural local bees wax and got started. I grated the wax into shreds on an old cheese grater, dumped it into the crock pot and melted it down. 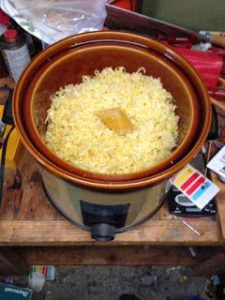 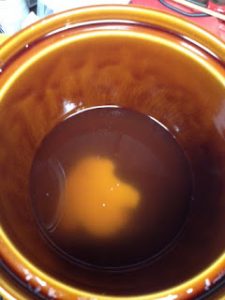 Then the magic really started. I knew the wax would thoroughly coat the call and provide a really good water resistant barrier, but I was not prepared for how well it would penetrate the surface of the wood. Because the wax was hot, (I hypothesized) It forced the air out of the wood very rapidly, allowing the wax to then fill the voids left by the air pockets. This means that the finish is truly in the wood’s surface as opposed to on it, which results in a much more complete and durable shield against wear and the elements. 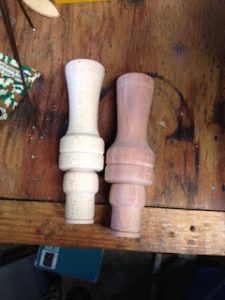 These are the raw wooden calls 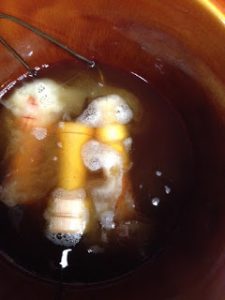 Look at all of the air being boiled out of the wood!
I let each call soak in the hot wax for 20 minutes to remove as much air as possible, then pull it out and allow it to cool. As soon as the wax is solidified, it is ready to take to the lathe and be buffed off with paper towels at high speed. The friction of the paper towel on the rotating call melts the wax, removing the excess and evenly distributing the rest over the surface of the wood. Often, the heat will have raised the grain, so it’s necessary to sand the the buffed call with 320 grit sandpaper and buff again with a clean paper towel. The results are an incredibly smooth-to-the-touch surface with a soft, satin luster. It’s not as shiny as the secret sauce but the grain and figure of the wood still pop out. 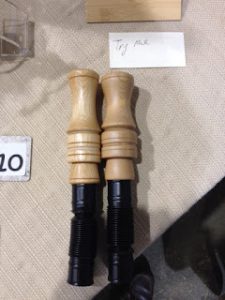 Maple. Secret Sauce on left and bee’s wax on right 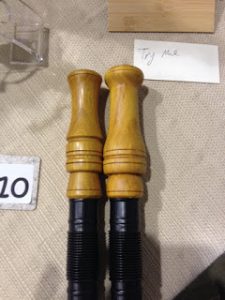 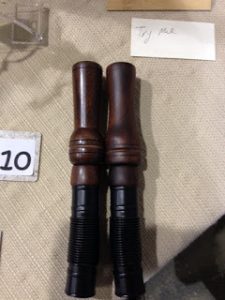 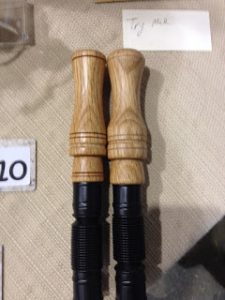 Oak. Secret Sauce on left and bee’s wax on right.
Experimentation is probably the most enjoyable aspect of what I do, aside from getting out in the field and putting my products into practice. For me, finishes and finishing is one aspect that can be played with quite easily and with good results! There is a ton of information out there on finishing, and this blog entry is hardly a scratch in the surface. If this fascinates you as it does me, do some web work and see what you find that piques your interest. Feel free to share your techniques with me, if you like. Above all, be curious and have fun!